DLP has assisted Cornerstone Property Investments to obtain full planning permission for the change of use of the former Methodist Church in Bristol for six 1-bed flats.

The former chapel, a locally valued heritage building, had been vacant for two years and was falling into disrepair. DLP worked with GSH Architects and Armour Heritage to present full evidence of how the historic elements of the building would be retained and enhanced.

Key elements were negotiated with the LPA including new doors in the least publicly visible elevations and windows to increase natural daylight for each of the new flats, creating a sympathetic conversion.

The application was considered by Members because of its departure from highways standards, and a Transport Assessment by SDD made the case that the building could, alternatively, be converted to alternative traffic/parking-heavy uses such as a children’s nursery, under permitted development rights. The proposed residential conversion was seen to be more sustainable in this respect 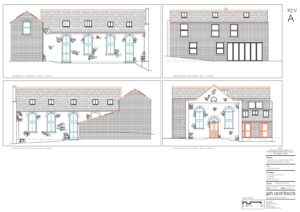